Furious Love was conceived before Darren Wilson had even finished his first film, Finger of God. He was in Istanbul, Turkey, and Heidi Baker, a missionary from Mozambique, began to pray for him. In the midst of her prayer, she suddenly saw, in her spirit, Darren filming the occult and demonic. The the Lord gave her this word for Darren: “You must go into the darkness to show the light.” Neither Darren or Heidi had the slightest clue what any of this might mean, and the last thing on Darren’s mind at that point was a “sequel” to Finger of God, which he still had yet to even put together!

Two months later, while in an otherwise normal church service, Darren was literally pushed back into his seat with the second part of God’s call to him. He heard, very distinctly, God tell him to do two things with this film:

That was it. Darren had his marching orders. But first, he had to make Finger of God.

Finger of God was released in late December, 2007. Darren had no marketing plan, no financial backers, and no distributers who were even remotely interested. He put it online, and word of mouth began to turn his strange, little film into an underground hit in the truest sense of the word. To date it has sold more than 60,000 copies, and has been seen by millions of people around the world.

The success of Finger of God opened up the possibility for Darren to move forward in his next production: Furious Love. 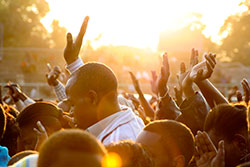 Darren and his faithful crew of two, Braden Heckman and Matt Bilen, began filming Furious Love in July, 2008, in Tanzania. The only direction Darren had for the film was to accomplish the two things he knew the Lord had told him to do. The reality of the war should be easy enough to show, but how does one film love? How does one translate the devastating effects of unconditional love from God onto a screen? This was the question that haunted Darren and his crew everywhere they went, and so they just delved further into the darkness, hoping at each stop that God would prove Himself faithful and that He would show up when the cameras were rolling. They were ever cognizant that if God did not show up, they had no film. 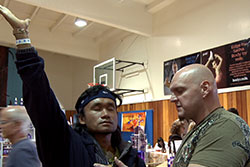 Filming was completed in August, 2009. With a budget pushing $300,000 and a growing expectation from the Finger of God fan base, Darren and his crew knew they had to deliver something that was at least equal to Finger of God. They knew they had some incredible footage and stories (over 200 hours worth), but how to put it all together? From August to October, Darren locked himself away in his studio in an effort to allow the Holy Spirit to guide him through telling the story of God’s immense love for a very dark, very sinful world. It was the most strenuous spiritual experience he had ever gone through. When he emerged, and after his crew had come in to put a polish and sheen on the film, they knew they had just created something very special.

The Lord also put on Darren’s heart in late 2009 to start a new form of distribution for Christian films, with Furious Love being the forerunner. He was told, quite clearly, to “turn churches into movie theaters.” Partnering with Sondra Martin Hicks and Heartstone Pictures, that’s exactly what they did. On February 14, 2010, Furious Love was unveiled to the world in over 500 churches in 19 countries.

The response has been, in a word, overwhelming. Feel free to visit our TESTIMONIES page or our MEDIA page to find out more about the reaction to this incredible film.

WP Films was founded by Darren Wilson in 2006 when he began work on what would become his first feature length film, Finger of God. The company currently concentrates on creating feature films that are both creatively exciting and spiritually engaging.

Furious Love is now available
at christian retail on DVD.